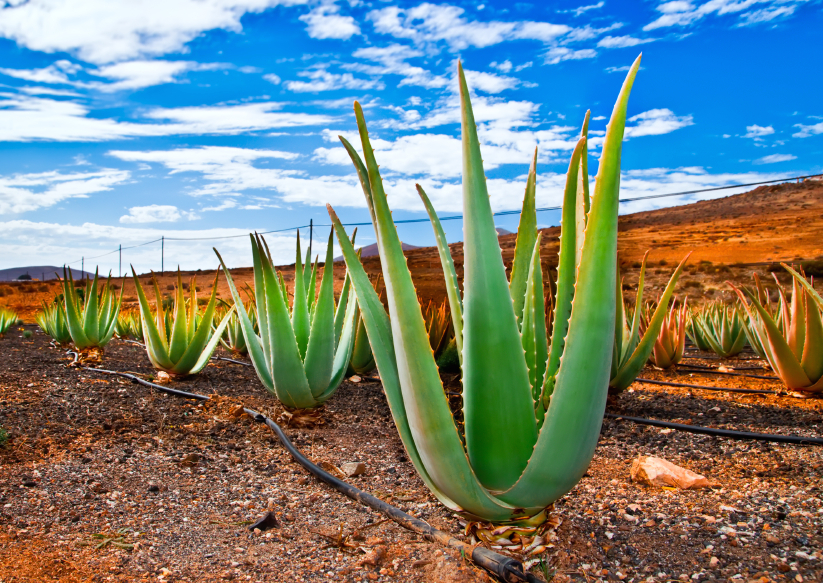 If there’s one thing I recommend you throw in your suitcase this summer its Aloe Vera – whether it’s in the form of a gel, cream or a supplement.

The desert growing plant contains over 130 active compounds and 34 amino acids believed to benefit your skin. So when you’re lying on a sun lounger soaking up your vacay vitamin D, make sure you have aloe on hand to alleviate any burns (of course it’s better not to burn in the first place but some people – ahem the Brits – are helpless in the face of heat) or take a supplement to provide your skin with extra protection.

Aloe vera can also soothe mosquito bites and calm a dodgy stomach thanks to its powerful anti-bacterial, anti-inflammatory and anti-viral properties.

Plus, since aloe acts as a prebiotic – which help healthy probiotics flourish – the juicy plant can also boost your immune system and improve your absorption of nutrients.

Live to one hundred?

The ancient Egyptians are credited with discovering the benefits of aloe vera – it was in Cleopatra’s beauty bag – and its healing properties have been documented in books and Mesopotanian clay tablets in countries around the world.

The Essenes (a spiritual sect known by the Egyptians as the ‘healers and doctors’) reportedly consumed copious amounts of aloe vera. ‘ The Essenes ate raw and living foods, smelted metals, experimented with chemistry and consumed aloe as their primary superfood…’ writes David Wolfe in his book Superfoods: The Food and Medicine of the Future. He goes on to say that the Essenes often lived to be one hundred and twenty-five years of age, during a time when the average life span was thirty-nine years.

Wars have even been fought over aloe vera; Alexander the Great apparently conquered the island of Socotra in order to procure aloe and during campaigns it was applied to the wounds of his soldiers. It’s also been used over the centuries to treat a hair loss, skin infections, hemorrhoids, gastrointestinal pain and sinusitis.

The latest scientific papers are giving credence to the legendary benefits of aloe vera.

In one study published in the journal Annals of Dermatology in 2009, healthy female subjects over the age of 45 were given either a low dose of aloe vera 1,200mg or a high dose 3,600 g (less than a teaspoon) for ninety days. The result? The researchers concluded that:

But the benefits of this desert succulent go way beyond the superficial with evidence suggesting it can help over 50 different conditions ranging from diabetes and ulcerative colitis to multiple sclerosis and cancer.

In one study, Dr. Paolo Lissoni, one of the top oncologists in the world, used a combination of aloe vera and raw honey on 240 patients. The study showed that the formula inhibited the proliferation of errant cells, exhibited immune-stimulating and antioxidant effects … enhanced patients’ survival time … and reduced toxicities, as proven by radiological evaluations. (In Vivo, 2009)

Growing up in Australia we’d snap off a leaf of Mum’s aloe plant at the first sign of redness from a burn or bite (I remember it working wonders on a jelly fish sting) but I’ve since learned there are many other ways to enjoy this juicy, collagen promoting plant.

The Smoothie: ‘Fillet’ the aloe vera by cutting a portion from the aloe leaf, removing the thorns on either side and separating the gel form the skin with your knife. Then add it into your choice of smoothie – it has an earthy, slightly bitter flavor and gels well with cucumber and pineapple. If you’re buying bottled aloe vera look for an organic, unprocessed product since processing will destroy the valuable healing polysaccharides.

The Salad: David Wolfe suggests mixing tiny cubes of raw aloe vera gel into a salsa or salad. I love this idea. I make a spicy tomato salsa with roasted peppers, tomatoes, olive oil, basil and chilli (Mum’s recipe) and am going to try a little aloe to offset the heat.

The Skin Tonic: Aloe Vera can help with everything from psoriasis and acne to ageing and eczema. Margo Marrone, a pharmacist, homeopath and founder of The Organic Pharmacy, originally created the Ultra Dry Skin Cream to treat her son’s eczema using aloe as the main ingredient. It smells divine and I won’t go anywhere without it having seen how it transformed cracked heels and a scaly patch on my hand (in one week).

The Supplement: There are many aloe pills on the market. Look for an organic, food-based supplement made using juice taken from the inner leaf. I’m currently trying Pukka Wholistic Aloe Vera capsules – which smell reassuringly like the real thing.

The Elixer: Aloe vera is also one of the 45 key ingredients in The Super Elixer, a food based alkaline powder created by Elle Macpherson and Harley street physician Dr. Simone Laubscher. The supplement also contains organic wheatgrass, prebiotics, probiotics, Chinese herbs and medicinal mushrooms and can be consumed daily in juice or water.

Last weekend the Sunday Times Australia published my feature about the benefits of an alkaline diet – you can read it here:

Laura Bond is a journalist, author and Nutritional Therapist. She specialises in helping clients beat stress, reduce their toxic load and prepare their bodies for babies. To find out more, click here.

One Response to Aloe Vera & the Ancient Essenes