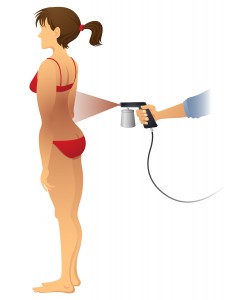 With less than a week till Christmas most of you will be in full festive swing.

That means hangovers, ham-overs and champagne all round (or, if you’re like Mum, sparkling kombucha).

It also means dressing up and going out, and for many women (and apparently one in ten men) fake tans.

We’ve been living in the bronze age for over a decade now – see Victoria Beckham’s wedding pictures in 1999 – and although these days we might prefer olive hues to the tango-d look of yesteryear, our love of fake tan shows now signs of abating.

Fake tan sales are worth an estimated £100 million a year and are the fastest-growing area for cosmetic sales.

But our favourite beauty treatment has a dark side.

Scientists have warned that the active ingredient, dihydroxyacetone (DHA) – which reacts with amino acids in the skin to turn it brown – has the potential to cause genetic alternations.

UK health journalist of the year, Sarah Stacey, recently flagged up the dangers in a piece in YOU Magazine:

‘If this [DHA] gets into the bloodstream, it could theoretically alter and damage DNA, which could in turn lead to the development of cancers and malignancies,’ she writes.

Diabetes, obesity and birth defects have also been linked to the ‘cocktail’ of chemicals in bronzing lotions.

In a recent article in The Telegraph Elizabeth Salter-Green, of UK charity the Chem Trust, warned:

‘Many of the chemicals in fake tan are toxic to reproduction and can harm a foetus.’

Beyond the Biscuit Smell

The recent science only validates what many of us have long suspected: that when you enter a tanning booth you’re not in Mother Nature’s kitchen.

The overwhelming reek that permeates salons that ‘do sprays’, should send alarm bells ringing, but the desire to look good tends to override good sense.

For years I’ve left appointments, sticky and smelly, wondering ‘is this a good idea?’ – before thinking ‘now I can go for a swim at the beach tomorrow.’

Any misgivings were cast aside by a desire to look glowing and five kilos lighter.

But unlike me, one plucky woman from the Gold Coast, took action.

When Sonya Driver’s sister was diagnosed with melanoma three years ago, she began researching the ingredients in spray tans (The sisters had started having fake tans to avoid the potential risk from UV rays).

Sonya didn’t like what she found and decided to develop her own organic self-tan.

After thousands of hours of research, Driver finally came up with Eco-Tan, a formula that contains NO, synthetic food colouring, GMO ingredients or petrochemicals. And NO biscuit smell.

Instead Eco-Tan products are made from:

I came across the company when I was last back in Perth. Wanting to look my best for my brother’s twenty-first (determined not to appear the pale, ancient sister from London) I googled ‘organic tan’ and quickly came across Centro Innovative Health in West Perth.

Both Mum and I decided to give it a go. After completing a grueling seven day detox (more on that later) we were in the mood for some pampering. And it certainly was a treat.

We were greeted by the founder of the centre, Susan Carr, an award-winning naturopath, who surprised us both with the news that she would apply the tan.

Carr – who is no doubt more at home with hormone analysis than taking aim with a spray gun – bravely stepped in to bronze us, in the absence of one of her staff members.

As Mum and I took turns to stand starkers in a luxurious tent in the middle of a well-ventilated room (I think it was the reception area) Carr explained how she had grilled the company before deciding to offer Eco Tan. ‘Being a naturopath, I wanted to know that it wasn’t going to harm my clients in any way,’ she says.

Mum and I emerged from Centro Innovative Health, head-to-toe in a honey-smelling gloss – with a stash of organic teas and lipsticks in hand. 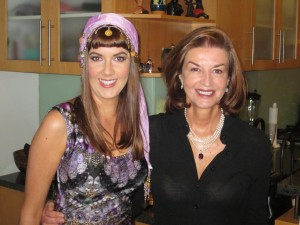 Mum and I before Banjo’s 21st

According to Carr there has been a steady increase in demand for the service and the product is now stocked at a variety of different health shops and clinics.

There’s even a dedicated Eco-Tan stall at Mum’s local farmer’s market and apparently the products are ‘big in Broome.’

Mum believes it’s the best tan she’s ever had.

I personally couldn’t decide which I preferred, the Eco Tan or The Organic Pharmacy tan I’d previously tried in London…

The active ingredient in The Organic Pharmacy Self-tan is a ‘100% natural DHA made from sugar beet.’ 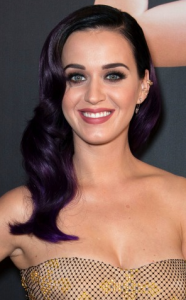 Katy Perry is said to be a fan, along with a host of other celebrities who don’t appear on The Only Way is Essex.

I recently made contact with Margo Marrone, co-founder of The Organic Pharmacy, to find out what makes her tan superior to the rest.

Marrone, a homeopath, explained that the bad smell usually associated with fake tan is largely due to formaldehyde residue.

‘During the processing of DHA – which comes from sugar – it is sometimes possible for formaldehyde to be involved in converting the Sugar to DHA,’ she says.

‘Our DHA comes form an Ecocert certified source where formaldehyde is forbidden so the DHA is gentle and does not give the awful smell usually associated with self-tan cream. Combined with nourishing shea butter and hydrating Aloe it means the cream goes on really well, does not streak and gives natural tan.’

I spent last summer in England topping up my sugar-beet tan. The grey skies put paid to a sun-kissed glow and I figured it was the next best thing. At weddings it elicited a lot of ‘you look well’ rather than the knowing, ‘nice tan’

This week I’m booked in for another festive bronzing. If anyone asks… I’ve just got back from Perth.  In the meantime I hope you all have a joy-filled Christmas and Happy New Year. I’ll see you in 2013 – with light and love. Laura