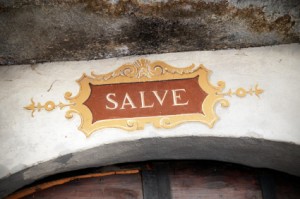 This is the product the pharmaceutical companies don’t want you to know about. It’s a remedy so simple anyone can make it at home. It’s been around since the 12th century and when applied topically it selectively kills cancer cells according to experts. Many claim it’s been a lifesaver. One of them is Livia, from Perth, Western Australia.

Here is her story, in her own words:

‘A few years ago a mole appeared between my breasts and in 2007 it started to attract my attention. It started to itch like crazy.

The mole looked like a miniscule bunch of grapes, very small – maybe a centimetre in size. I went to the doctor and he said, ‘No worries Livia, it’s nothing.’

But I knew something wasn’t right. I showed it to a friend of mine, June and she suggested I rub something called ‘Black Salve’ onto it. She said: ‘Look Livia, you have nothing to lose, if it’s nothing the black salve won’t have any affect and if it’s something more serious, the black salve will take it away.’

Within twenty-four hours of putting the paste on I could feel something happening. There was a very mild burning, a sort of drawing feeling. The next day the redness around the mole had gone from being two centimetres to five centimetres.

June got in touch with a man in America who regularly consults with experienced doctors, and she emailed him a photo of my chest. He said, ‘Definitely put the paste on again. Leave it for three to four days – no more than that – put it all over the redness this time, not just on the little spot.’

Three days later I thought ‘Oh my God.’ This thing grew bigger and bigger, it looked like a spider with legs and I thought ‘Christ what’s going on!’ I didn’t want to go to the doctor because I thought he would kill me for trying this ‘crazy’ therapy!

But my friend – and the consultant – both reassured me. The two of them were supervising me the whole time. I went to the chemist and bought a large gauze patch, to cover the sore on my skin. At this stage, there was a pulling sensation and a bit of pain and I could see that something was coming out. I took some painkillers so I wasn’t so uncomfortable.

By the fifth day this thing was like, no joke, the size of a dinner roll. It was like another breast.

I put the paste and gauze on one last time and the man in America said: ‘Don’t worry, no more paste [after this] just leave the gauze, leave it for 24 hours, you will find that everything will come out. Don’t be concerned with the hole that you will be left with, because within three days it will heal.’

By the way this man we were speaking to in America? It was free to contact him. He never asked for a cent.

So anyway by the fifth day this thing was huge, and it was painful, pussy and disgusting. It was monstrous.

On the fifth day I called my friend and said ‘look I’m coming over.’ It was 11pm at night but I said I’m coming over and I’m staying with you. My husband didn’t mind.

It was nearly midnight and we were emailing the American guy and he said ‘take that gauze off, don’t worry it will heal.’ You had to see it. It was like a piece of meat – red with roots.

But as soon as this thing came off  the pain disappeared. 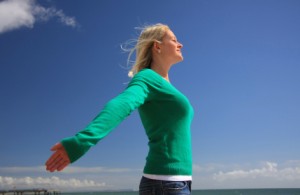 Interestingly, I hadn’t been able to breathe properly for three years. I was constantly catching my breath and I didn’t know why. But as soon as this thing came off, I could breathe freely.

My friend had the special hermetically sealed container ready to go – to have the tissue lab tested immediately.

I was told to put [food grade] hydrogen peroxide on the wound on my chest. I did that three or four times a day and it wasn’t painful at all.

Three days later, you would not believe it! My breast had almost completely healed. Now all I have is a tiny white mark – as if I had had an operation and had stitches. It’s miniscule.

The man in America – and the experts he consults with – believed it was the worst melanoma they had ever seen. He said I would have lost two breasts and maybe my life. But instead I used the black salve for five days – and had three days of healing. I tell this story to everyone. It saved my life.

We really wanted to get the ‘tumour’ lab tested, but even though we took it to the doctor within hours they said it ‘wasn’t live’ and they ‘couldn’t test it.’

What a joke! The biggest lie ever.

When I told my doctor about what happened he thought I was nuts. But to his credit he is actually now reading up about the black salve and told me a few months ago  ‘Well there’s something here I’ve got to admit it.’

A little while later, it was discovered that June’s daughter-in-law had a skin cancer on the back of her hand. ‘Cutting into it would have damaged many nerves so she tried the black salve which worked beautifully,’ says June.

They went to the specialist, had tests done and she was cancer free. Weeks after that, black salve was  banned in Australia.

To listen to testimonies from others and to find out how to make Black Salve go to:

One Answer to  Cancer (www.oneanswertocancermovie.com) 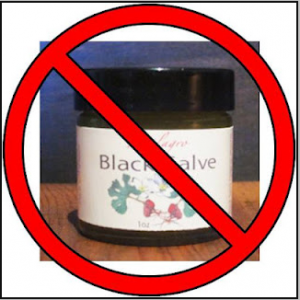