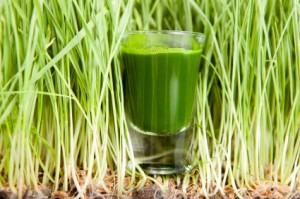 The idea that ‘it’s got to taste bad to be good for you’ can surely be traced back to wheatgrass juice. The lawn-y smell, the weirdly sweet – then bitter- taste, the leaden gut feeling you can get from it, is far from pleasant.

But if you can learn to stomach it, you’re treating yourself to one of the most potent purifiers known to man.

‘ Wheatgrass treatment eliminates stored toxins and poisons. It flushes the blood, digestive system, and organs,’ writes Danica Collins in The Top 10 Natural Cancer Cures ‘Studies show that wheatgrass juice has a powerful ability to fight tumors without the usual toxicity of drug therapy or radiation.’

The late Ann Wigmore is regarded as the pioneer of wheatgrass therapy. She founded the Hippocrates Health Institute (now the Ann Wigmore Institute) and treated thousands of patients with her wheatgrass blend and special diet.

She is credited with restoring health to many patients with chronic illness – notably cancer – who had failed to respond to conventional treatments.

‘A surprisingly high percentage of those advanced patients found that wheatgrass treatment not only alleviated their conditions and halted the progression of their diseases, but actually cured them and left their bodies cleansed and rejuvenated,’ writes Collins.

Vicki Standley, Clinic and Retreat Manager of Mullum Sari in Byron Bay, is a big believer in the healing juice:

‘Wheatgrass is packed with chlorophyll, which increases hemoglobin and helps to bring more oxygen into your body,’ she explains. ‘When you deprive cells of oxygen, that’s when they start becoming cancerous.’

I stumbled upon the Mullum Sari website in the midst of my research. What a find! The Aussie retreat offers oxygen therapy, colonic hydrotherapy and infrared saunas – the latter still being incredibly hard to find at gyms and spas in Australia.

According to Standley a steady stream of cancer patients pass through the doors of Mullum Sari, along with exhausted city-dwellers and locals looking for an energy boost.

So what other conditions might wheatgrass be helpful for? ‘Besides cancer patients you’re looking at people with chronic fatigue – anyone who suffers from a lot of stress – anyone who gets terrible headaches and migraines,’ says Standley. 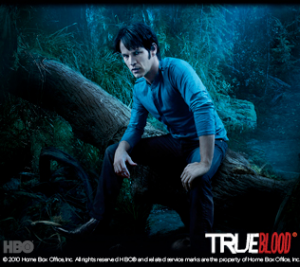 In the hit HBO series, ‘good’ vampires rely on a synthetic blood beverage  -‘True Blood’ – to stay nourished without feasting on humans.

But perhaps Vampire Bill Compton could survive on wheatgrass instead.

Chlorophyll, you see, has almost the same molecular structure as hemoglobin, and, in the nutrition world it’s known as a powerful blood-builder.

Anecdotal evidence shows that patients who soak in chlorophyll water baths can double their red blood cell count in days, according Dr Bernard Jensen in Health Magic Through Chlorophyll from Living Plant Life.

Wheatgrass is a nutrition powerhouse, packed with at least 13 vitamins, including B12, many minerals and trace elements, including selenium, and all 20 amino acids.

The deep green liquid also contains laetrile (remember the apricot kernels?) the antioxidant enzyme SOD (Superoxide Dismutase) and a host of other nutrients.

If that wasn’t enough, wheatgrass is  one of the most alkaline foods you can find. Eating foods that have an alkalizing effect on the body – think green leafy vegetables, lemon and avocado – can help keep your system healthy and cancer free (since cancer cells thrive in an acidic environment).

Dr. Chiu Nan Lai, of the University of Texas Health Sciences Center in Houston, was one of the first to suggest that wheatgrass might be cancer preventative.

According to Dr. Lai wheatgrass has anti-mutagenic properties. Through using an Ames Test (a blood test for detecting any kind of cancer) she demonstrated that an extract of wheatgrass was capable of reducing the cancer-causing abilities of known chemical mutagens by up to 99%.

In another  2006 study, published in the Journal of Clinical Oncology, terminally ill cancer patients were given a 30ml infusion made from fresh wheatgrass leaves and roots each day for six months.

The researchers noted a 50-70% overall improvement in patient health following the regime. They concluded that wheatgrass juice is an effective, natural alternative to blood transfusions.

Drinking wheatgrass can help with everything from digestion and heart disease to fatigue and skin problems, according to experts.

You can also apply it to your face – to give you skin a natural cleanse – or add it to your scalp…some believe it can help delay hair turning grey.

The miracle green stuff could even help you scale Kilimanjaro – earlier this year two raw-foodists took wheatgrass sachets with them up the mountain. With the reduced oxygen at that altitude, you can see why they thought it was a good idea.

I like to mix a shot (28ml) of wheatgrass in with my morning juice of celery, carrot, apple and broccoli sprouts. I recently bought a three-month supply or shots, from Evolution Organics. Each night I defrost one of the mini-cups, so it’s ready to go in the morning.

The wheatgrass is locally grown in Northamptonshire and picked after two to three months of sunshine and rain. Apparently outdoor grown wheatgrass contains no simple sugars and carbohydrates and more chlorophyll than indoor equivalents. 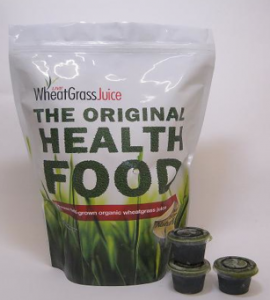 Evolution Organics guarantees that the wheatgrass is frozen until late evening on the day of delivery. So if it’s being sent to your office, you can keep it by your desk until you go home.

Over in Perth, Mum buys a tray of wheatgrass from Paul at the Mt Claremont farmers market every Saturday (Mt Claremont Primary School103 Alfred Road, Saturday
8am – 12pm).

On that note, if you’re interested in hearing more about Mum’s holistic regime, she will be speaking at the upcoming Chemical-Free Life Seminar in Perth, on Saturday 21st July.

The event – focusing on ways to minimize exposure to toxins and reduce the risk of cancer – is organised by Wendy’s Organics and Perth Organics.

Mum would love to meet the local readers of this blog and have the opportunity to share tips and experiences with you. Details below:

$15 Earlybird price by July 14th or $20 per ticket thereafter

You can purchase tickets from Perth Organics