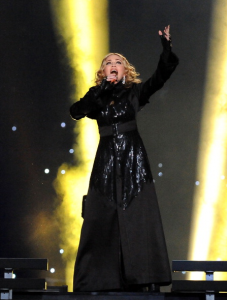 My sister and I had just passed through security when Madonna performed her final half-time number at this year’s Super Bowl. A flight attendant made a boarding announcement: no one moved. The departure board flashed: no one looked up. All eyes were glued to a tiny TV screen, in an airport lounge outside Denver, as Madonna sang the words to ‘Like a Prayer.’ Similar scenes played out across America as millions of people clapped their hands in sync to the gospel-style choir.

One massive Madge fan, ‘Eddie’, captured the crowd’s rapture at his local bar. He wrote underneath the clip: ‘I used to pray to Madonna as a child (thinking she was the Madonna as in ‘Madonna & Child’)’

We might be embarrassed to talk about prayer but in these times of rapid change and uncertainty many of us are craving spirituality. With the papers filled with talk of financial meltdown, war in Syria and meat grown in labs – our minds get tired and our souls retreat.

‘ We see ourselves as very spiritual when in fact we’ve gone backwards,’ said Caroline Myss (Mum’s hero) at a workshop in London last weekend.

‘We’ve never been more narcissistic…we’ve never been sicker, we’ve never had more lying and deceit…People will look back and say: ‘How did people navigate through these times?’ They will wonder: ‘What were we thinking?’’

Myss encourages people, especially eternal worriers, to take up a regular prayer practice whatever their belief system. But the ‘worried well’ are not the only ones who can benefit.

Many cancer patients and their families turn to prayer following a diagnosis, and while sceptics continue to trash the concept of prayer and healing, it seems heaven is louder.

And doctors aren’t afraid to ask for God’s helping hand: 99% of physicians are convinced that religious beliefs can heal, according to one Lancet report.

When Mum turned up to an appointment a little while ago – in a particularly stressed frame of mind – her practitioner asked: ‘Can we pray together for you?’ The holistic German doctor knelt beside her bed (where she was lying covered in acupuncture needles) and said something to the effect of: ‘We ask the lord to help Gemma find healing and release the stress from her body.’

This isn’t the first time someone has asked to pray for Mum. A few weeks into starting the blog I received this message from David, a distance healer living in LA:

‘Without your Mum’s permission I would not act, but I would like to …add her name to our distant healing register and request that our group of 50+ healers send her healing.’

Having a stranger take the time to send you a message, and offer to pray for you, can be as healing as any physical treatment.

Bryan Hubbard author of Time Light and publisher of the health journal What Doctor’s Don’t Tell You recently wrote a special report on prayer. It revealed that prayer, reiki and other distant healing therapies do appear to work – even if researchers are at a loss to understand why.

In a review of 350 prayer studies (double-blinded, peer reviewed and randomized) researchers found that 75% demonstrated that prayer had a positive impact; 17% found it had no impact and 7% showed a negative impact.

Bryan also referenced a study from the University of Texas, which revealed those with the highest belief in prayer experienced the most positive results.

‘It is important to know that you are being prayed for, and it’s important to believe the prayer can be effective,’ said Bryan when I spoke to him a few weeks ago. ‘Jesus often said: ‘I have not healed anybody, but his faith in me has’.’

‘Most of us will say prayer is just about putting your hands together and appealing to something greater than yourself. But there’s a deeper point to it,’ said Bryan. ‘I think fundamentally prayer is trying to demonstrate that somehow there is this unity. When you feel that sense of unity and love, the body’s immune system kick starts back into life.’ 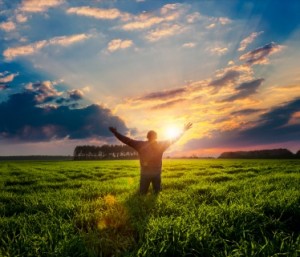 In Time Light, Bryan talks about his mother’s rapid recovery from end-stage breast cancer, and suggests that his family’s sudden outpouring of love might have helped her heal:

‘When we were first given the diagnosis everyone in the family expressed their enormous love for her. I ‘love bombed’ my mother with messages and flowers. My father, who enjoyed spending money about as much as a banker relished a zero bonus year, suddenly raided all his savings and willingly paid for all the expensive treatments [intravenous vitamin C and hydrogen peroxide]. This was the biggest expression of love my mother had ever witnessed.’

Serious sickness tends towards despair, but making room for spirituality can help you navigate the dark nights. And for those who wince at the word prayer – there’s plenty of other ways to feel more at one with the world.

‘For people who are agnostic or atheist, being spiritual may mean going for a walk in the late evening and feeling the vastness of the night sky,’ writes Joshua Rosenthal founder of the Institute for Integrative Nutrition (where Mum and I are currently studying). ‘It has been my experience that when people feel connected with the big picture, they get healthier faster.’ Integrative Nutrition: Feed Your Hunger for Health and Happiness.

My flat in London overlooks a Carmelite nunnery. At night, when the light from the stain glass windows beams into my bedroom, I often wonder what cloistered life would be like.

A few weeks ago, as I was walking past the adjoining church, I was invited in to say a prayer. I lit a candle; I felt peaceful. As I was leaving a woman handed me a small medallion hanging from a thread and told me: ‘All who wear the medallion will receive great graces.’ Apparently the medallion was created by Saint Catherine Labouré in the 1830s, after she was visited by the Virgin Mary. 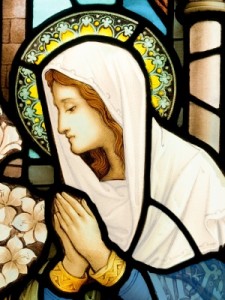 Call me superstitious, but I’m not taking it off.

Some of us pray to the mother of Jesus, others pray to Madonna – the mother of pop; some of us send prayers in the form of flowers and others get spiritual kicks from walking the dog. Whatever it is there’s no doubt that getting outside our egos is good for the soul and that telling someone who’s sick you’re praying for them will boost their self worth, if not their immune system.