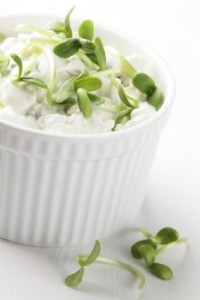 While Mum has been lucky enough to be able to afford these things, for many people alternative cancer treatments can be financially crippling. Why? Unlike radiotherapy and chemotherapy they are seldom covered by health insurance.

So I’m happy this week to talk about a therapy that’s cheap, simple and which has paved the recovery for thousands of cancer patients.

No appointments or airfares required for this one, all you need to start the Budwig Diet is a tub of cottage cheese and a bottle of flaxseed oil.

Bill Henderson, a cancer coach who has helped over 8000 cancer patients reverse the disease, calls the Budwig protocol, ‘the cheapest health insurance you can buy.’

Bill became interested in alternative cancer treatments following his late wife Marjorie’s four-year battle with ovarian cancer. Bill maintains that Marjorie’s death was not the result of the cancer itself, but rather the endless rounds of chemotherapy she endured.

After witnessing the pain she suffered, Bill embarked on more than a decade of research into alternative therapies and eventually stumbled upon the Budwig Diet which is now the backbone of his anti-cancer programme.

‘Basically, the Budwig protocol blasts the cancer cells with oxygen,’ writes Bill in his best-selling book Cancer Free. ‘…[C]ancer cells react to oxygenation the way a vampire would react to broad daylight: they shrivel up and die.’

The Facts on Flax

Flaxseed oil is packed with omega 3 fatty acids, a group of nutrients that most of us have heard of by now.

While the brain-boosting and anti-inflammatory properties of omega 3 have received a great deal of coverage in recent years, the role this vital nutrient plays in oxygenating our system is perhaps less well known.

‘Omega 3 works like a magnet on the cell membrane, attracting oxygen to the cell and also causing the oxygen to enter the cell,’ explains Bill Henderson in Cancer Free.

Since flaxseed oil can oxygenate the blood, you might then wonder why the cottage cheese is required? The answer is simple.

When you blend cottage cheese with flaxseed oil, the mixture becomes water-soluble and thanks to this water solubility the omega-3 fatty acids are effectively delivered to the cells.

Yes – according to many experts, including Professor Jane Plant – dairy products can drive hormonal cancers. But Bill maintains that when you mix cottage cheese with flaxseed oil it ‘loses its dairy properties.’ 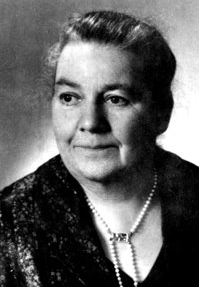 After collecting and analyzing thousands of blood samples Dr Budwig discovered that the samples of the seriously ill (including cancer patients) were always deficient in one vital fatty acid – linoleic acid. She also found that the patients were often lacking albumin (a combination of linoleic acid and sulphur-based protein).

Dr Budwig hypothesized that those suffering from serious illnesses could be returned to health by eating a diet high in these essential nutrients.

Budwig tested her theory by feeding cancer patients a combination of 40 grams of flaxseed oil mixed with 100 grams of skim-milk proteins (the latest Budwig formula recommends low-fat cottage cheese in its place).

Over a period of weeks, she noticed the tumours gradually receded.

Since that time, thousands of people struggling with cancer– including those dealing with brain cancer and bone cancer – have become healthy again using this simple diet.

Dr. Budwig (who died in 2003 at the age of 95) claimed to have had over a 90% success rate with her diet and protocol with all kinds of cancer patients over a 50 -year period.

Dorothy McCord, who had liver cancer, ovarian cancer (with metastasis) and a low-grade brain tumour saw a dramatic shift in her condition after starting the Budwig Protocol.

I’ve included an excerpt from her testimonial on the Budwig Centre website below:

‘I went to have an ultrasound done on my ovaries the other day, to see if anything has changed with the cysts on my ovaries. When I went, they told me that there were no cysts left (mind you one of them was the size of a lemon). My ovaries were totally clean. Also I had a MRI on my liver again, and that was good news as well. The mass on my liver has shrank in 4 months from being 6 cm to 1.1 cm. I can’t tell you how ecstatic I am. I am almost in shock over the amount of good news I have received this week. For a while now, every time I went to the doctor, I only received bad news. I am so happy, and more determent (sic) to stay on the program as long as it takes.’

William L Fischer’s fantastic book How to Fight Cancer & Win is filled with stories from people who have benefitted from the Budwig protocol. One of the most remarkable reports is from Keith O*, a sixteen year old who faced amputation due to an osteosclerotic sarcoma (bone tumour). I have included an extract of his story below:

‘He [Keith] was immediately started on an intensive program of radiation treatments, but still no improvement was noted. This young high-school track star said he would rather face death than lose his leg. The situation appeared hopeless. Keith’s distraught parents consulted with the most eminent doctors they could locate in many areas, but all confirmed the frightening prognosis.

Only a meeting with Dr Johanna Budwig and her words of hope stopped the planned amputation in time. After just two weeks on the Budwig formula, Keith was able to completely extend his right leg…A medical examination conducted two months later revealed that the swelling of Keith’s involved leg had receded considerably and his blood count had returned to normal. Within just three months of starting on the regimen, he was back at school. The family reports that the Budwig formula remains a part of its daily diet. The entire family, including Keith, is in excellent health.’ How to Fight Cancer and Win ( pages 156-157) 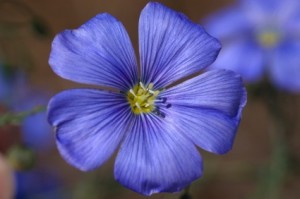 Another recent French study found that low levels of alpha-linolenic acid (found abundantly in flaxseed oil) were a predictor of increased risk of breast cancer. The study was published in the February 2000 issue of the European Journal of Cancer.

Make sure the flaxseed oil you buy is cold-pressed, virgin, unrefined and raw. The valuable (anti-cancer) fats in flaxseed are removed during the refining process that most commercial oils undergo. This routine process can include heating, bleaching, deodorizing, ‘defoaming’ as well as the addition of chemical preservatives.

It’s also vital to refrigerate flaxseed oil and keep it away from sunlight since the oil oxidizes very rapidly.

It must be low fat (less than 2%) and preferably organic.

The basic Budwig Diet consists of a daily dose of one or two tablespoon of flaxseed oil blended with half to one cup of low-fat cottage cheese. Seriously ill patients, including cancer patients, may need to consume higher quantities than this however I would strongly recommend that anyone considering this diet first consult a qualified practitioner and read all of the supporting literature on the subject.

To produce the chemical reaction required for it to be a potent cancer fighter, the cottage cheese and flaxseed oil MUST be machine blended.

She then adds a mixture of frozen berries and occasionally a teaspoon of stevia to sweeten her Budwig breakfast. 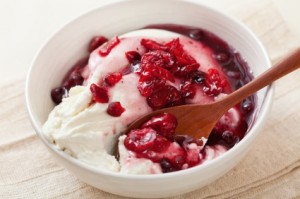 You can ‘bespoke’ your Budwig by adding fresh herbs, raw vegetables, fruits, cinnamon, raisins… the list is endless. Fisher suggests adding finely grated cucumbers and radishes with some chopped tomatoes and a crumbling of dill.

It’s important to blend the cottage cheese and flaxseed oil first  – to ensure they’re properly homogenized – before adding the other ingredients.

If you’re interested in a coaching session with Bill Henderson ( he charges $180 for the service) click here.

To read more about the Budwig Protocol go to the Budwig Centre website or scroll through the detailed report about it on the Cancer Tutor.

Finally, I just wanted to say a huge thank you to all the people who got in touch following the piece that appeared in The Sunday Times Style Magazine in London. The emails were so uplilfting and I’m sorry that I haven’t yet had a chance to respond to all of you – being a one man band can make it tricky.

3 Responses to The Budwig Diet