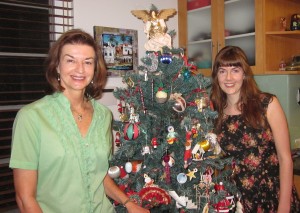 I was going to make this blog-post a light-hearted one…something about simple holiday pleasures (falling asleep while reading about Eleanor of Aquitaine) or maybe a little vignette about the deeper appreciation of Christmas, when someone you love has had cancer.

I figured – ‘who has the time, or the inclination, to read about clinical trials and cancer treatments when there’s champagne to be popped and hangovers to be nursed?’

But then… Mum came home from Ozone therapy yesterday and mentioned that one of her friends had been advised – by an American practitioner- to rub frankincense into the area where her cancer was.

So it seemed like the right time to share with you a little about how frankincense and mistletoe might help with cancer– and if you’re not in the mood, then feel free to save this for the New Year, when you’re not trying to stuff a turkey or wrap-up a skateboard.

No wonder frankincense was chosen by one of the Magi to give to baby Jesus.

Thousands of years ago it was equal in value to gold; the Ancient Egyptians, who used frankincense in many of their rituals and purification ceremonies, thought it to be the ‘sweat of the Gods’, while the Greeks and Romans used it to treat a wide variety of diseases.

Indeed, if the three wise men had arrived in Bethlehem a little earlier their gift of frankincense might have helped Mary through her childbirth: it is thought to reduce hyperventilation during labour.

Today frankincense – which comes from the resin of the Boswellia Sacra tree – is used to treat depression, gout, eczema, scarring, insomnia AND cancer. 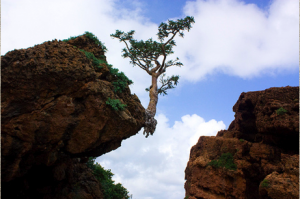 Mahmoud Suhail, an immunologist, has been studying the beneficial effects of frankincense for years.

He’s currently working alongside medical scientists from the University of Oklahoma to determine just how frankincense stops cancer from spreading.

‘Cancer starts when the DNA code within the cell’s nucleus becomes corrupted,’ he explained recently in a BBC interview.

‘It seems frankincense has a re-set function. It can tell the cell what the right DNA code should be.  Frankincense separates the ‘brain’ of the cancerous cell – the nucleus – from the ‘body’ – the cytoplasm, and closes down the nucleus to stop it reproducing corrupted DNA codes.’

The highest quality frankincense comes from Oman – but you needn’t cross-deserts to get hold of it – you can buy it online from Young Living Oils (be sure to order the essential frankincense oil rather than the sacred frankincense oil).

As a little aside, you might also be interested in the therapeutic benefits of the other Wise Man gift – Myrrh. It’s meant to help with sore throats, gum disorders, inflammation, digestive problems and cellulite. You can read more about it here.

More than just an excuse for a Christmas party smooch, Mistletoe is the most commonly used oncological drug in Germany . 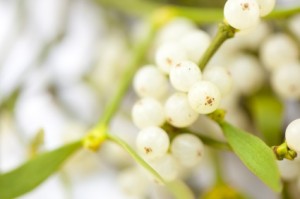 Thousands of years ago, the druids of Europe also used it as a contraceptive (strange to think that an old-school prophylactic is now hung above doors to encourage wanton behaviour).

8 MIILLION cancer patients have benefited from Mistletoe – in conjunction with conventional therapies – over the past few decades, according to one report, from the Mapapo Institute (German – Argentine Institute for Oncologic and Immunologic Investigations).

Iscador, a specific extract of Mistletoe, has been used in controlled pilot studies in the Berlin University, Witten/Herdecke, Germany and the University of California, San Francisco, USA, for breast, colon, prostate, brain, intestine cancer, cervical dysplasia, ovary, stomach and lungs, and in metastasis processes.

One study, published in the journal Alternative Therapies in Health and Medicine in 2001, looked at the survival times of patients with cancer of the colon, rectum, stomach, breast and lung.

1668 patients were treated with Iscador while 8475 had conventional treatment only. Survival time in the Iscardor group was roughly 40% longer than in the control groups.

So How Does it Work?

Mistletoe can increase natural-killer cells and increase the cytotoxicity of macrophages (in other words, it puts the guns in the hands of the good guys).

According to Dr Keith Scott-Mumby in Cancer Research Secrets there are different forms of Mistletoe based on the tree from which it is harvested. So you have M for Malus ( apple); P for Pinus (pine); Q for Quercus (oak); and U for Ulmus (elm) with each having specific benefits for different types of cancer.

So it’s worth doing your research if you’re considering adding Mistletoe to your treatment arsenal. It’s also important to note that mistletoe can be toxic and you need to find a qualified homeopath or alternative doctor who can treat you safely.

The cancer charity Yes to Life has an extensive list of practitioners – mostly in Europe – on their website. http://www.yestolife.org.uk/treatment_display.php/15

I would also like to end by saying a huge thank you for your support, stories and suggestions over the last few months. Having such lovely feedback from you has been as important to Mum as the advice from her practitioners.

May the learning and sharing continue, and may health, happiness and hope follow you all through 2012. 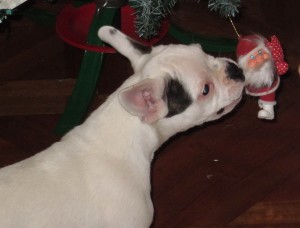