There’s no way of getting around it. When you’re told you have cancer, there’s going to be some nightmare moments, whatever path you take.

The overwhelming desire to go back to an old, pre-cancer, reality is torturous, to say the least. And I’m only getting this second-hand.

For Mum, the first few weeks were pretty grim. After a particularly trying weekend I remember her saying, ‘Is this it? Is this what my life is going to be like now?’

Before she’d started to heal, and before we’d discovered just how many cancer miracles were out there, it all seemed a bit hopeless.

But then we started to watch, to read to listen – and if you were very quiet, you could hear the hope trickle in.

If someone you love gets cancer, don’t send them comfort food (too much of a minefield). Send them one of these life-affirming DVDs instead: 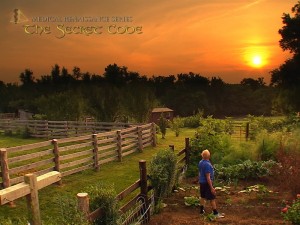 Watch it because… it’s like being wrapped-up in a toasty warm towel. In the opening scene you see the quirky Dr Norm Shealy feeding his horse ‘Spotlight’ while the sun rises in Missouri. Your heart rate slows.

The Gist… Three desperate patients, all with chronic conditions and/or depression, are given a chance to transform their lives.

In 90 minutes you’re given a glimpse into what the future of healing will look like – a future where Aspirin and Xanax make way for ‘natural narcotics’, past life therapy and copper pyramids and Tesla cords.

Shealy pulls no punches about conventional medicine and the ‘PharmacoMafia’ but his infectious laugh and laid-back manner seems to say ‘change comes slowly’ – and with a smile.

‘As my father said, common sense, is the most uncommon commodity.’ 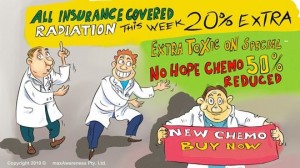 Watch it because…You’re probably the only one who hasn’t.

The movie is shocking (‘people aren’t dying of cancer, they’re dying of the treatment’) illuminating (‘BPA is one of the main causes of prostate and breast cancer’) and uplifting – just listen to the stories of patients with bone, lung and liver cancer cured by Hyperthermia.

‘ We need to change people from victims to ‘victors’ of cancer.’

‘ Many years from now people will look back at this time and wonder what kind of Neanderthals we were.’ 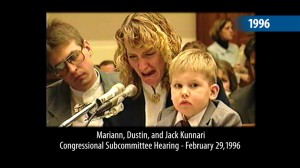 Watch it Because… If someone you love has been given a death sentence – Dr Burzynksi could be their life-line.

The Gist… The Texas Medical Board (and the FDA) has waged a ten-year war on Dr Burzynski. Why? Because he’s dared to create a cancer treatment that actually works – Antineoplastons – and Cancer Inc is missing out on the windfall.

The remarkable stories from patients will have you both bawling your eyes out and boiling with anger.

Read more about his story – and how you can help him in his latest legal battle – here.

‘Dr. Burzynski had MRIs of brain tumors, known to be almost universally fatal, that had simply disappeared. It was obvious to me that Dr. Burzynski had made the most important discovery in cancer treatment — ever.’ Dr Julian Whitaker

‘not withstanding that… it’s possible to indict a ham sandwich – probably there’s not much there.’ Comment from a committee member, during the 1995 grand Jury – the 5th against Burzynski. 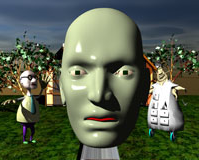 Watch it Because… your teeth matter more than you think.

The Gist… When you have a root canal filling (a procedure to ‘save’ a dead tooth) you run the risk of developing cancer, sinusitis, Multiple Sclerosis, arthritis and more.

This documentary will have your stomach churning at the toxic substances routinely deployed by dentists (some products don’t meet the safety standards for the sewage system) and thinking twice about where you want to book your next check-up.

‘ Dentistry is the only medical profession that thinks it’s a good idea to keep dead, gangrenous tissue in the body.’

Watch it because…it will send shivers up your spine (just re-watching the trailer gave me goosebumps).

The Gist… Featuring some of today’s most recognisable health heroes this revolutionary documentary demonstrates how vitamin C can cure cancer, why B3 is better than prozac and why 106,000 people die every year in America from pharmaceutical drugs.

‘I love that film, not just because I’m in it, but because people watch it and their attitude immediately changes,’ said Phillip Day when I spoke to him recently. ‘All of a sudden they’re not resentful when you start explaining the changes they need to make to their lifestyle – they really understand why they need to do these things.’

‘ Good health makes a lot of sense, but it doesn’t make a lot of dollars.’ Andrew Saul 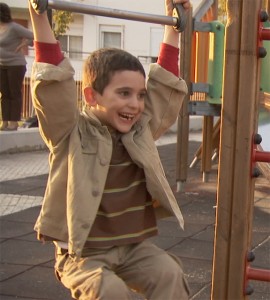 The Gist…The body has an awesome capacity to heal itself. Don’t believe me? Just listen to Arielle whose brain tumour disappeared after Emotional Release Therapy or Edgar who worked with a ‘dream healer’ to cure his kidney cancer.

The film features the likes of Bruce Lipton, a renowned cell biologist, who has spent the last three decades studying quantam physics and looking at how our emotions affect us on a molecular level.

‘At least one third of all healings – including drugs, surgery and other allopathic interventions – have …to do with the placebo affect.’ Bruce Lipton

‘One of the fundamental things that has to change in the future of medicine, is this focus on the gene, as being the solution to every illness,’ Lynne McTaggart

One Answer to Cancer 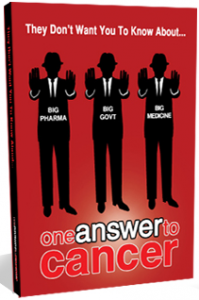 Watch it Because…you’ll find out about a treatment that boasts a 100% success rate for treating primary breast cancer.

The Gist… Aldara is the devil; black salve is the saviour.

The Australian government has known, since 1986, that the active ingredient in Aldara (a skin cancer cream) causes cancer.

This first part of the film follows the battle waged by Elaine Hollingsworth on Big Pharma following her near death experience using Aldara (which has now been taken off the market).

The second part of the film is dedicated to the miraculous black salve. You’ll hear from a courageous woman who rushed to the bathroom following a biopsy to insert black salve into her breast cancer (now cured) and countless other tales from people who owe their life to this (illegal) salve.

‘ Everything revolved around me saving my own hide with my own hands rather than relying on the butchers.’ Skin cancer patient cured himself using black salve.

‘When the freedom for people to decide what they want is lost, when doctors no longer have the right to seek the truth or search for alternatives. When central control of everything we do is absolute, then that is the time when we have totally lost our freedom and the ability to progress.’ Dr Michael Tait

Many people have also recommended Healing Cancer From the Inside Out with Mike Anderson.

I haven’t had a chance to watch it yet, but I’d love to hear from you if you have – or if you’ve seen any other film that changed the way you thought about health and healing.

10 Responses to Documentaries, the new drugs?