Our beautiful bulldog, Gnocchi, was diagnosed with cancer just a few weeks
after Mum. 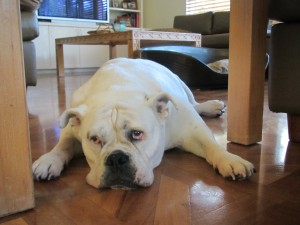 When we brought her back from the vet, she sat next to the fishpond, refusing to come inside.

The vet told Mum that it was an aggressive form of bone cancer and that Gnocchi would have, at most, six months to live.

Chemotherapy and amputation, she said, were the only options.

Mum of course, had other ideas.

She immediately called Dr Bruce Ferguson, an integrative vet who offers acupuncture, Chinese medicine and whole food therapy. Bruce hails from Florida, but is now living in Perth, Australia, with his Great Dane, Bella, whom he calls ‘the greatest Dane.’

Bruce took one look at Gnocchi’s foot and prescribed her some Chinese herbs – and a black salve.

That’s because it is. Hildegard von Bingen, a gifted mystic, clairvoyant and healer, created the salve around 1100AD. The concoction is made from bloodroot, galangal root, zinc chloride, and water.

‘When you apply it topically, it causes abnormal cells to necrose, or die,’ said Bruce. ‘In a sense, it’s better than a surgeon’s eye, because a surgeon can’t tell bad cells from good cells, but the black salve can.’ 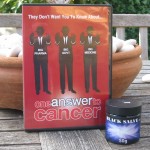 A few weeks after Gnocchi’s foot was slathered with the black ointment, her tumour… dropped off.

The family was eating dinner when my sister suddenly screamed: ‘Oh my God, what is that? Oh my God, it’s Gnocchi’s tumour – Mum!’

That was the end of the meal, but the start of Gnocchi’s recovery.

She’s in rude health – batting her eyelids at men on her walk and baring her teeth at pretty girls – all thanks to a very inexpensive treatment.

‘It gave me insights into what naturally keeps animals healthy in the wild,’ said Bruce.     ‘ It also made me question some of the things I later learnt in vet school. Some things – like how to do surgery and diagnostic tests – are wonderful. But other things, like using pure antibiotics and vaccinating dogs annually, doesn’t make sense.’

Bruce isn’t against vaccinating pets, but believes we often overdo it. ‘ If you check the dogs blood Titers, you’ll find most dogs have immunity for life: just like humans. We don’t get a booster every year, so why do our dogs?’

According to Bruce, over-vaccinating dogs can disrupt their immune function, and is just one of the things that contributes to diseases, like cancer.

Conventional dog food is another one of Bruce’s bugbears. ‘Dogs are meat-eaters, but a lot of dog food is made from corn and wheat, ’ said Bruce. ‘The chemical analysis of corn shows that it’s a high protein food, so the makers think it’s Ok to feed it to a carnivore.’ 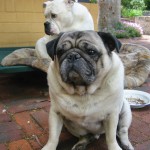 Dr Lynn Peck, an alternative vet from Florida, sums up the absurdity of this when she says; ‘Cats and dogs are carnivores not Cornivores!’

In the US farmers grow more than 92 million acres of sweet corn for animal feed, high fructose corn syrup and corn oil (and only about 250,000 acres for human consumption).

And soon, most of that might be genetically modified. Monsanto, the agribusiness mammoth , recently developed genetically-modified sweet corn – to add to their list of Franken-vegetables. This corn has been specially developed to tolerate being doused in Round-up (another one of Monsanto’s products). The idea is that airplanes can soak the fields in this toxic herbicide, killing weeds, and everything else in its wake, while the corn thrives.

‘What does Bella eat?’ I asked Bruce, who was walking her when we spoke.

‘Today I plan to slow cook her some beef, and throw in some broccoli, sweet potato and maybe some quinoa. Then I might top that with sardines.’

According to Bruce ‘a sardine a day keeps the vet away.’

‘They’re choc-full of omega three fatty acids, calcium and protein. They’re also lower on the food chain so they don’t bio accumulate toxins. Sardines are just beautiful – they can help with virtually everything, whether it’s cardiovascular disease or depression.’

Mental health, according to Bruce, might be one of the key differences between cancer in dogs and cancer in humans.

‘Humans can stagnate their bodies by thought processes. Things like depression and anxiety can affect your immune system – and if you have decreased immune function, you’re more likely to get cancer.’

‘ But dogs tend to be a little bit happier everyday, and not so depressed – they’re just so zen, so real and so down to earth.’

She’s a canine Queen Victoria, with a face that forever says, ‘we are not amused.’ 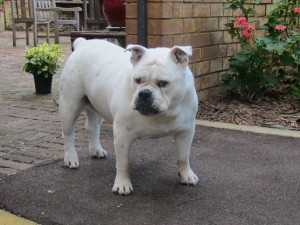 ‘Mole,’ she seems to mutter.

‘ Gnocchi, is it time for your walk?

‘Talk to the hand…unless you’re taking me down the laneways.’

But after 11 years we’ve come to know when Gnocchi is feeling happy with the world.

Her wagging stub of a tail doesn’t lie.

Long may it keep wagging.

To listen to testimonies from people who have used Black Salve I highly recommend you watch the documentary One Answer to Cancer (www.oneanswertocancermovie.com)

18 Responses to The Black Salv-ation