An Orangutan pinched my appointment

‘Wow you look amazing!’ said Mum’s surgeon when she walked through the door.

Seven weeks had passed since Mum’s hysterectomy and she’d returned to the hospital for, what was meant to be, her six-week check-up. But Mum’s surgeon, who we’ll call Dr Dolittle*, had to cancel the previous weeks appointment: he’d been called out to operate on an orangutan at Perth Zoo.( FYI: Not all doctors are in it for the money. Some, it seems, are in it for the monkey.)

Dolittle was evidently pleased to be chosen for such an important job, but he admitted it could be quite stressful, with the organgutan’s keepers hovering over him throughout the operation.

Mum no doubt felt the same way about all of us, hovering over her during those first few weeks, telling her off for ‘doing too much’ and quizzing her about anything she put in her mouth.

Dolittle asked Mum what she had been eating since he last saw her.

‘ Wow there won’t be any left of you soon!’ said Dolittle, ushering Mum onto the bed.

‘Darling you’re healing beautifully,’ said Dolittle. He proceeded to tell mum how lucky she was to have caught the cancer early. ‘Which doctor can you thank for that?’ he asked.

‘Me. I read a testimonial in the paper and insisted on having a transvaginal ultrasound and CA-125 test.’

‘Oh’. Dolittle furrowed his brow, and then said, ‘Well you’re very lucky you caught it early.  I bet that made it easier for you to say no to chemo?’

Dr Dolittle put his arm around mum and walked her to the door.

For Mum, having chemo, after all she’d read, was never an option.

‘Why poison yourself with something you don’t believe in?’ was her answer to the inevitable question.

But some people really do believe in the power of chemotherapy, and for those people, having chemo is the right thing to do.

One of my best friends was upset after reading my first blog: she called her mum and read out to her all the terrible things I’d written about chemotherapy. I felt awful.

My friend’s mum was diagnosed with stage three ovarian cancer seven years ago. She had chemo. And today she is cancer free.

Apart from being strong, funny and perpetually positive – all things which are essential for beating cancer – my friend’s mum also believed chemotherapy would work, and it did.

You might knock the power of belief, but even the most committed cynic might find it hard to roll their eyes at the following story.

In the 1950s there was a man who’s cancer disappeared – and re-emerged- in sync with his changing belief about his treatment.

A psychologist called Bruno Klopfer had a patient named Mr Wright who was being treated for advanced cancer of the lymph nodes. Wright’s neck, armpits, chest, abdomen and groin were filled with orange-sized tumours. The diagnosis was dire: Wright was expected to die within days.

Then Wright heard about a new anti-cancer drug called Krebiozen. Wright begged his doctors to be given the treatment.  They finally relented and decided to give him an injection on Friday….

… by Monday, Wright was up and about and Klopfer reported that his tumors had ‘melted like snowballs on a hot stove.’ Ten days after his first Krebiozen treatment, the doctors declared Wright cancer free.

For the following two months Wright remained healthy: until articles about Krebiozen started cropping up in the news, reporting that the drug had NO impact on his type of cancer.

Wright first became depressed – and then got the cancer back.

Wright was admitted to hospital once again, and this time his physician tried an experiment. He explained to Wright that some of the initial batches of the drug had degenerated during shipping.  He reassured Wright, however, that he had a new, highly potent, version of the drug and would treat Wright with this.

Wright agreed to the treatment again – not knowing the doctor was about to inject him with water.

The result? Tumour masses once again melted and Wright was cancer free for two months… that was until the American Medical Association (AMA) announced that a nationwide study of Krebiozen had found the drug worthless in the treatment of cancer.

Two days after this report came out – Wright died.

Coincidence? The word is no longer in Mum’s vocabulary.  She now believes everything happens for a reason (including her cancer) and that belief can heal as much as despair and fear can kill.

Oh and in case you were wondering, the orangutan is doing just fine. 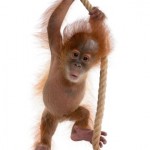 3 Responses to An Orangutan pinched my appointment