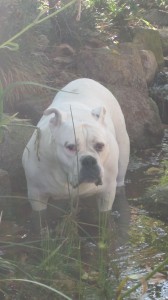 Gnocchi having a therapeutic dip

As any dog owner will know, when times are tough, a four-legged-friend is a welcome comfort and distraction: you’re forced out of introspection and off the sofa to feed them, pat them and laugh at their facial expressions.

So when we discovered our beloved bulldog, Gnocchi, also had cancer – it was a devastating blow. About five weeks after Mum’s diagnosis, she was forced to talk tumours and treatments all over again. The local vet suggested Mum make an appointment with the canine oncologist. ‘ Does that mean discussing chemo options?’ Mum asked. ‘ Yes,’ the vet replied. ‘ Well I’m not having chemo,’ said Mum. ‘ And I can assure you that I’m not putting my dog through it either.’

When you’re weighing-up whether your dog should have chemotherapy – essentially whether the pain and suffering (which the dog won’t understand) is worth the promise of few more months of life – the choice seems obvious.

But when it comes to our own health, most of us accept the risks that come with conventional treatments – and for cancer patients that means the possibility of developing ‘chemo brain,’ being burnt by radiotherapy or butchered by surgery.

We’ve collectively bought into the idea that ‘harm caused by the healer’ is an inevitable part of the ‘battle’ against cancer. But it doesn’t have to be this way.

According to Dr Keith Scott Mumby, author of Cancer Confidential, ‘cutting, burning and poisoning with chemo does as much, or more, to finish off the patient as the disease itself.’ And there are studies to prove that sometimes the tumour is better left alone.

The late Dr. Hardin B Jones, one of the world’s top statisticians in the field of cancer, led a 33-year study which found that ‘untreated cancer victims live up to four times longer than treated individuals.’ (The Betrayal of Health by Dr. Joseph Beasley).

Jones’ research has inevitably fuelled controversy, but his evidence has been backed-up by more recent studies.

A study published in The Lancet revealed that lung cancer patients who undergo radiation therapy have a 20 per cent higher mortality rate than non-radiated ones, while a review of a number of studies involving 30,000 breast cancer patients found only 3.5% difference in survival after five or six years in those taking Tamoxifen ( the most commonly prescribed breast cancer drug) compared to those taking a placebo.

So if conventional treatments can’t be relied upon – is early detection the best line of defense?

A study, published in The Archives of Internal Medicine in 2008 suggested that even mammograms might be carcinogenic.

The study compared two groups of Norwegian women ages 50-64, in two consecutive six-year periods. For every 100,000 women who were screened regularly 1,909 were diagnosed with invasive breast cancer over six years, compared with 1,564 women who did not have regular screening.

In his book Radiation from Medical procedures in the pathogenesis of cancer and Ischemic Heart Disease Dr John Gofman – a nuclear physicist and a medical doctor – reveals that over 50% of the death-rate from cancer is linked to X-Rays (more on alternatives soon).

We’ve become accustomed to constant screenings, ultrasounds and check-ups – believing our survival depends on being ever more vigilant about our health – but our parents and grandparents knew no such regime.

My 91 year-old granny has never had a mammogram in her life, let alone a pap smear (I don’t think she knows what one is) and she couldn’t be in a better shape: she volunteers at the local library, selecting books for ‘the elderly’ at a nursing home.

It’s interesting to note that when she was in her prime, in the 1940s, breast cancer affected one in 22 women. It now affects one in eight women in Britain and by 2015, it’s predicted to affect one in four. ( Say No To Cancer, Patrick Holford).

Other types of cancer have risen more sharply.

Since 1985, the risk of prostate cancer has risen dramatically – it’s expected to have increased 234% by 2015, while the incidence of uterine cancer is expected to rise by 83%.

While there’s a plethora of reasons cancer is fast becoming the world’s biggest killer – the depletion of minerals, like selenium, in the soil, the large-scale use of pesticides and plastics, our increasingly Frankenstein diet – you would have thought, with the apparent advancements in medicine, we’d nonetheless be making some progress. But perhaps it’s time to acknowledge there’s a limit to what modern medicine can do.

In a recent article in The Times the philosopher Nassim Taleb writes: ‘ The elders knew better: Greeks, Romans, Byzantines and Arabs had a built-in respect for limits of knowledge. I have also in the past speculated that religion saved lives by taking the patient away from the doctor.’

I’m not inferring that all conventional treatments are ineffective, because in some cases it’s the right option. I’m also not suggesting that it’s always best to ignore the tumour and assume the prayer position- although sometimes that does work.

All I’m saying is that we owe it to ourselves to take responsibility for our health, explore all the research available and do what feels right for us.

For Gnocchi, that meant defying the vet’s orders and soaking her plastered paw in the pond.

3 Responses to Iatrogenic (adj): Harm Caused by the Healer