‘There is nothing more difficult to take in hand, more perilous to conduct, or more 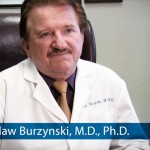 uncertain in its success than to take the lead in the introduction of a new order of things because the innovator has for enemies all those who have do well under the old conditions and lukewarm defenders in those who may do well under the new.’ Machiavelli, The Prince

Decades before Mum’s diagnosis (and years before Mum even became a mum) a doctor from Poland discovered a cure for cancer.

Dr Burzynski was one of those names that kept coming up during our research of ‘alternative’ cancer treatments. The testimonies from Burzynski’s patients, who had undergone his innovative ‘antineoplaston’ therapy, were awe-inspiring. But it wasn’t until I watched the eponymous film Burzynski ( thank you Kate Thompson for the recommendation!)that I was able to fully grasp how epic this doctor is.

‘Dr. Burzynski had MRI’s of brain tumors, known to be almost universally fatal, that had simply disappeared. It was obvious to me that Dr. Burzynski had made the most important discovery in cancer treatment — ever. It’s what we have been looking for,’ says Dr Julian Whitaker in Burzynski, which was released last year.

So what is Antineoplaston Therapy?

In the 1970s Dr Stanislaw Burzynski discovered several substances present in the blood of healthy individuals, that were absent from the blood of cancer patients.

He hypothesized that if these missing substances (which he called anti-neoploastons) were put back into the blood of cancer patients, it might aid their recovery.

Some of these patients were cured.

Since treating his first patient in 1976, Burzynski has successfully treated virtually every type of cancer – giving patients, from around the world, hope of a future. Even those patients who were told they didn’t have a future.

Jessica Ressel was one such patient. At the age of 11 she was diagnosed with inoperable brainstem glioma, a cancer which, according to DrWhitaker, ‘is by and large, 100% fatal.’

Jessica was offered radiation and given 8-18 months to live.

She was told the radiation would leave her deaf, and would destroy her pituitary gland – responsible for growth and development. Ergo, Jessica would be trapped in an eleven-year-olds body.

The Ressels decided to give radiation a miss and opted instead for Burzynski’s antineoplaston therapy.

One year after starting treatment Jessica’s tumour disappeared, for good. She is now a healthy 24-year-old, with children of her own.

But Burzynski’s success isn’t merely anecdotal. The response rate for treatment of malignant brain tumours at the Burzynski clinic is 81%, while the complete remission rate is 35% – nothing short of miraculous when you look at the cure rate for standard treatments – surgery, radiation or chemotherapy.

The picture below gives you some idea of just how successful Burzynksi’s treatment is. 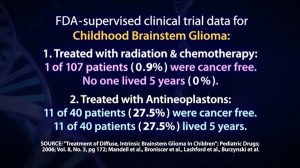 So why have we not heard about Burzynski?

The answer is simple – and sinister.

The Food and Drug Administration (FDA) has spent almost thirty years ( and millions of taxpayers’ money) trying to lock up Dr Burzynski.

Since 1983, they have raided his clinic, harassed him (and his patients) and tried to obtain a criminal injunction against him. Finally, in 1995 the FDA succeeded. Dr Burzynski was indicted on charges of violating an injunction, mail fraud, and selling his antineoplaston treatments in interstate commerce.

But thanks to the publicity (and public outrage) generated by the trial and the heartwarming testimonies from his patients (expect to be sobbing) Burzynski was acquitted and allowed to continue treating patients, from his clinic in Houston, Texas.

Why was the FDA so hell-bent on taking Burzynski out of the game?

The FDA (and their bestie, big Pharma) realised that if Burzynski’s drug was approved, chemo would go the way of car phones, financially crippling the pharmaceutical industry.

As Julian Whitaker explains in the movie:

‘Think about it, we’ve got thousands of doctors in oncology, and in oncology residency programs, we’ve got the pharmaceutical industry pumping out chemotherapeutic agents every month. There are all kinds of machines that deliver radiation, we’ve got all this stuff in the war on cancer, and it’s trillions of dollars. [SOURCE: ACS]

If the National Cancer Institute (NCI) spent just a slice of its annual budget ($5,200,000,000) on funding research for innovators like Burzynski – cancer might become a thing of the past, like smallpox or consumption.

Sadly, most of their money is funneled into more chemo and radiation research.

As one oncologist so succinctly says:

‘We have a multi-billion dollar industry that is killing people, right and left, just for financial gain. Their idea of research is to see whether two doses of this poison is better than three doses of that poison.’ Glen Warner, M.D., Oncologist ( his license was eventually revoked).