Two tests every woman should know 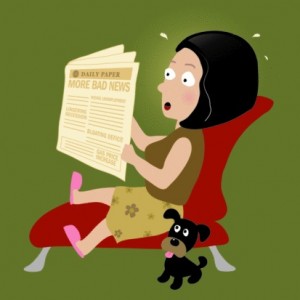 Mum was patting the pug and reading the paper when she first realized something was up.

The West Australian had put together a special report on ovarian cancer. I’m eternally grateful. Most health news, at the time, was focused on the Duchess of Cambridge’s pre-wedding diet.

Flicking through the pages mum turned to read a woman’s personal story – and suddenly felt queasy. She recognized every symptom the woman mentioned: the bloating, the stop-start periods, the faint- but persistent- drawing pain in her lower abdomen.

She saw her GP and asked to have a CA-125 blood test and a Trans-vaginal Ultrasound. She’d read, years before, that these two tests provided the best indication of ovarian cancer. Indeed, in a recent study of 200,000 women, British Doctors found that using the tests in tandem detected 90% of ovarian cancer cases.

CA125 – or Cancer antigen-125 – is a protein found at elevated levels in those who have ovarian cancer. But other conditions – such as endometriosis, benign ovarian cysts and pregnancy also produce higher levels of CA125.

That’s why the ultrasound is also recommended. Mum actually had both tests done 18 months previously: but this time the tests came back positive. A grim reminder of how fast cancer can move.

At this stage Mum still didn’t quite believe she had cancer. She was sure, somewhere along the line, there’d been a mistake. Even lying there in her backless hospital gown, waiting nervously for her full hysterectomy, she was positive the tumour, or whatever the dark mass the ultrasound had revealed, wasn’t really anything to worry about.

The night after the operation, the brilliant surgeon, who’d spent the previous night pouring over mum’s results, came over to her bedside and said: ‘ Now darling, we’ve got some bad news. You have ovarian and uterine cancer.’

‘It’s a very aggressive form of cancer and I’d really urge you to have chemo,’ said the surgeon.

Through her tears Mum managed to blurt out. ‘I’m not having chemo.’

It’s one thing to tell yourself you’ll never have chemo, but it’s quite another matter, when you’re lying there, your ‘normal’ life disappearing with every drip of morphine – to tell one of Australia’s top gynaecological oncologists you won’t be taking his advice.

Mum spent those first two weeks agonizing over whether she was being stupidly self-righteous.

It didn’t help that almost everyone – best friends, family, beauticians and Chinese doctors alike – were all shaking their heads in despair.

But then, something strange happened.

Mum found that once she told people, unequivocally, that conventional treatment really wasn’t an option for her, the chemo converts changed their tune: quite often, they would start listing people they knew, for whom, tragically, chemo didn’t work.

But even once she’d rallied the troops, there was still that twinge of, ‘what if?’ coupled by an overwhelming desire to abdicate responsibility and place it in the hands of someone who, in theory, knows best.

So what helped Mum blaze her own path? These were a few things that ultimately made up her mind.

* Chemotherapy improves 5 year survival by less than 3% – according to this Australian study.

* Dr. Robert Atkins, the late physician and diet guru, once said: ‘There is not one, but many cures for cancer available. But they are all being systematically suppressed by the American Cancer Society, the National Cancer Institute, and major oncology centers.’

But the final, knock-out blow for chemo, for mum, was this:

*A few years ago, the McGill Cancer Centre in Canada – one of the most highly regarded cancer treatment centres in the world – did a study of oncologists to find out how they would respond to a diagnosis of cancer.

On the confidential questionnaire, 58 out of 64 doctors ( that’s 90%) said that all chemotherapy programs were unacceptable to them and their family members.Why? Many believed chemotherapy drugs are ineffective and that they have an unacceptable degree of toxicity.

18 Responses to Two tests every woman should know